What can you say about David Hernandez? His powerful voice put him on so many people’s radar from the very first time he sang on American Idol and he hasn’t slowed down since. Anyone who has seen him perform live knows he isn’t an overproduced artist, his voice delivers just as he sounds anywhere you listen to him. AND, if you’ve seen him live, you know he brings 100% of himself to all of his performances because he is a true professional.

These days, with a world-wide pandemic, David is bringing that 100% to his Facebook and Instagram in live performances every Wednesday night at 7PM PT/10PM ET to entertain us while we are pretty much stuck inside and lift your spirits. I’ve also seen David put together some amazing shows where his generous heart showcases other artists right along side him and he makes sure each of them feels the love and gets the spotlight. That is something that impressed me right from the beginning. You can also see that quality displayed in is Quarantuned shows each Wednesday, as he brings in other artists via his live Instagram. In an industry that can make people a little selfish because of its very nature of self-promotion and need to rise as high as you can, this is such a refreshing quality to see.

I’ve know David for a while and we’ve become great friends, so I’ve wanted to bring him for an interview but I also wanted it to be the right time, the right way. With the world in a bit of chaos and in need of some major healing, this seemed to be the PERFECT time to showcase him in an article. I do hope this is the first of many that we can do because I know he has so much to bring to the world and WILL bring so much to the world.

I hope you sit back and enjoy this piece as much as I enjoy bringing it to you and be sure to catch David’s live shows on Wednesdays throughout the time we will all be in isolation. I personally cannot wait to see him live and in person again soon!

Q: You’ve been performing in some capacity since you were very young. Do you remember when you were bit by the bug or was it just something that has always been a part of you?

David Hernandez: My grandpa took me to an audition for a theater company that was in a strip mall where he was the janitor. I was always singing around the house and telling my mom how I wanted to be a famous singer. I got the part for a musical called “The Canterville Ghost” and remember my first time on stage. The smell of the fog machine, the way the shoes sounded on the wood floor and how exciting it was to perform. That’s when it “bit” me. 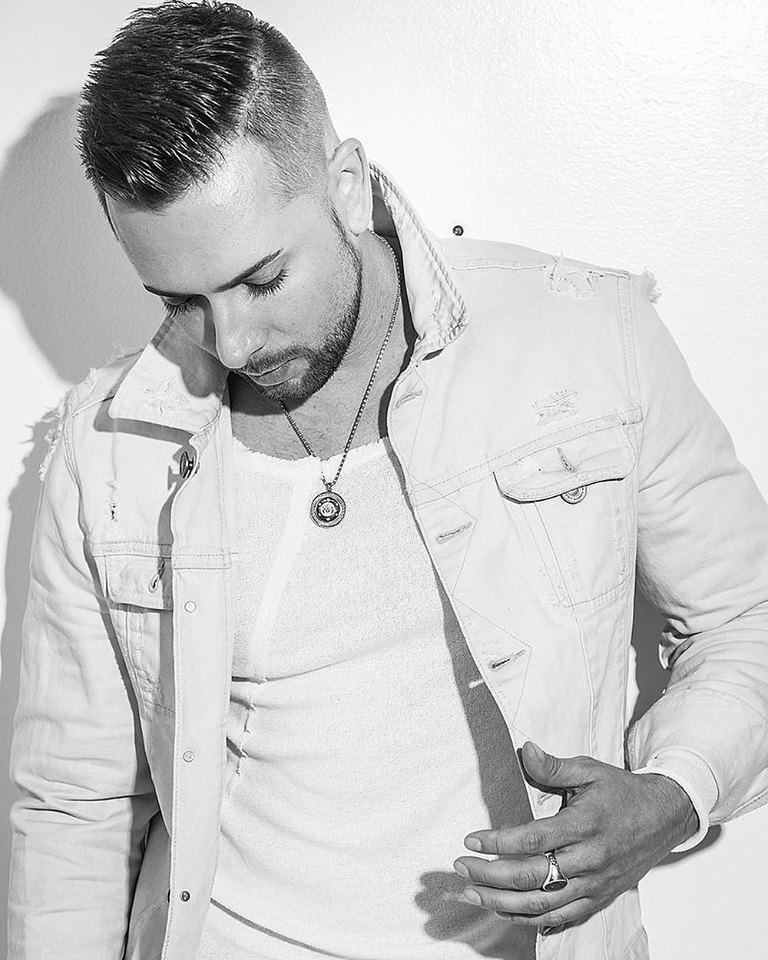 Q: We have to get the obvious American Idol questions out of the way, so….. I’ve heard you say that the real work begins after Idol, and I totally get that. For those who may not understand that fact, tell us how Idol helped you in your journey and what you’ve had to do to sustain/elevate your career to where it is now?

David Hernandez: Well Idol gives you a platform and then you decide what to do with it. You get to decide what type of singer you want to be and what kind of music you want to put out. You basically are introduced to millions of people at once and given an opportunity to show your talents. While you are on the show, you are taken care of as far as food and housing. So in some ways, you are spoiled. You have vocal coaches, an incredible band & contestants to share the experience with. When you get off the show it’s back to reality. You probably need an apartment, to pay off some debt and if you weren’t lucky enough to win, you need a job. Lol. I was blessed enough to have Michael Orland in my corner who secured me a national tour right after the show with a promoter at the time. But from then, I networked and put myself out there to be hired. I also started working on my debut album almost immediately. I’ve always been really driven in that way so it wasn’t new for me to find work and work hard. But life is hard and so is the entertainment industry so being in the Idol  “bubble” was the least stress I encountered over the years.

Q: What advice would you give to your younger self about American Idol and what advice can you offer current and future hopefuls/contestants?

David Hernandez: I would tell myself to RELAX. I was always so anxious because as a poor kid growing up in AZ, this opportunity meant a lot. And it meant that if I did really well, I could get out of Arizona and fulfill the dreams that I had since I was a little boy. So I may have pushed too hard with certain relationships and opportunities because I was afraid to fail. So yeah, relax and let if flow is what I would say to my younger self AND to future contestants. What is meant for you always be for you.

Q: You released a bunch of songs, more than most artists would on an album, with Kingdom: The Mixtape. You’ve said they tell the story of your journey and that they were written/recorded over the past years. Was releasing them cathartic for you?

David Hernandez: SUPER cathartic for me. I was sitting on all of these songs for years just waiting for the right time to release them because other people said the timing wasn’t right. Finally I decided the timing was right for me and dropped a 23 song album. It felt good.

Q: Let’s talk about you as a person for a second. David Hernandez is many things, one of thing I know is that you are very honest in your social posts and that is refreshing. Was it a conscious choice to be that way. If you’re having a bad day or struggling at the gym, is it just natural to post as such? Is there any temptation to just be all smiles and roses?

David Hernandez: It has been a progression of life trials and tribulations that has led me to be so honest on social media. I think that it’s helpful when people show their “ugly” side because we are all human and we all know that none of us are perfect. More often than not, someone out there is having a tough day or an “ugly” day or just tired of what the world is throwing at them. So to be able to share in that experience helps each other get through rather than feel isolated.

Q: When it comes to artists, I think many people forget how much WORK you all put into your craft. Besides getting up on stage, there are so many things to be done to promote and prepare. When you’re recording or performing what would a typical week be like for you?

David Hernandez: Taking care of my body is def the most important thing because my work requires my body to be healthy. Then preparing set lists, learning new songs, rehearsing with the band, promoting the show (which is a full time job in itself), contracts with the venue, people getting sick & having to cancel, finding replacements etc. Then after the show is the meet & greet. Then the next week is sending out thank you’s and appreciations cards or texts. I mean, it never ends. Lol. But I love what I do.

Q: I think the definition of Indie Artists has become a bit misunderstood by many. What does it mean to you?

David Hernandez: Someone without a label for financial backing. But also someone who is in complete control of their art and artistic integrity. We are the final yes or no when it comes to anything being released. We have our hands in ALL OF IT.

Q: On a little more personal note, what are your thoughts on LGBTQ personalities when it comes to coming out? Sometimes, it feels like it’s expected that we take out a billboard (just in case it isn’t obvious already).

David Hernandez: I think now more than ever it’s our responsibility as LGBTQ artists to share our stories because people are DYING…all of the time, every single day. We need to support our brothers and sisters but it starts with each and every single one of us. We are stronger together. So standing up and speaking out, sharing stories and fighting the fight for equality is important.

Q: Full disclosure for anyone who hasn’t seen me post about you, I absolutely adore you but, we all have our critics and haters so how do you handle those people?

David Hernandez: Some things bother me but I have people like you that undyingly support me and encourage me so more often than not, those negative critics just roll off my back. And like I learned growing up, “honey what people think of you is none of your business!” And, it’s true. I can’t be worried about the haters.

Q: You’ve been so open about being bullied and your spandex bumble bee costume, was it? What advice would you offer to anyone who is going through that now for being different?

David Hernandez: I definitely was bullied for that costume but my mom always encouraged me to be who I was. I didn’t see anything wrong with it, to be honest. When the other boys started calling me gay, fag, sissy, girl, homo etc, is when I started to realize I was different. I would say to anyone being bullied to just know that it will end. If it’s bad, tell a teacher, and if you are old enough, move to a city where there are more people like you. Always be who you are unapologetically.

Q: You had/have a residency with the phenomenal Effie Passero in Mexico, tell us a little about that experience. Can we look forward to more of that? You also got together to for 2nd Hour with your first single and video ‘What I See’ being released back in January. Is there more coming when you two can be in a room together again after all the distancing is over?

David Hernandez: I love the residency in PV. It’s a lot of fun and Mexican people are the kindest people. Effie & I make a great team together and I am excited about working on our EP and releasing more music. After all of this craziness with the COVID-19 is done and everyone is safe, I look forward to writing and getting back in the studio with her. It’ll happen!!!

Q: Describe yourself in three hashtags.

Q: With the current Corona Virus pandemic, things have been tough for everyone including artists. You have been offering your talents via live streaming on Facebook and Instagram. How has that been for you? Can we look forward to that continuing until we are all clear?

David Hernandez: It’s been tough financially. Some days are heavier than others but I stay optimistic that we will see an end to all of this. And YES, every Wednesday night at 7pm PST, I host “QuaranTUNED” where I perform original material, cover songs, and also take requests from everyone that comments! FB & IG LIVE!

Q: What else is up next for David Hernandez?

Q: Where can everyone follow you and keep up with all you have going on?