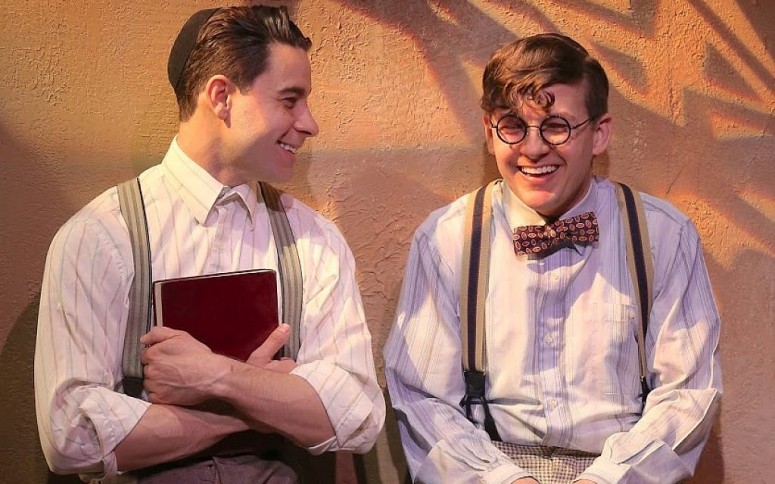 A few weeks ago, in between trips to Los Angeles, I had the honor of seeing an Off Broadway play, Vilna. No matter what my schedule was, I definitely knew I HAD to see the talented Sean Hudock in the role of Motke Zeidel and I wanted to see this show about the Holocaust because although I haven’t studied it since college, I have thought about it often.

It saddened me to read the statistic that 49% of Millennials cannot name a single one of the over 40,000 camps and ghettos from this time. The Holocaust is becoming a faint or non-existent event of small significance and this cannot be. In order to insure history does not repeat itself, we need to be aware of the events that took place, how certain groups rise in power, and how other groups are so easily targeted. (Sound familiar… I thought so).

The play is only running for a SEVEN more performances, so I encourage you to grab tickets and head out to see it before it closes. Besides my good friend Sean, who always gives phenomenal performances, the cast is chock full of talent. The ghost of Motke Zeidel is played by Mark Jacoby and the cast also includes Carey Van Driest, Patrick Toon, Seamus Mulcahy (Motke’s best friend), Tom Morin, Brian Cade, James Michael Reilly, Tom Morin, Nathan Kaufman, Sophia Blum, and Paul Cooper. Vilna was written by Ira Fuchs and directed by Joseph Discher.

I know many of us are familiar with the story of the Holocaust but trust me, it is so powerful to see this story in person. Motke’s story, in particular, is heart wrenching. Imagine having to choose who you would give up each week from you own community to sacrifice to the Nazi’s in order to keep them from your own loved ones? Imagine knowing you were sealing these people’s fate, people you knew all of your life, to people you knew you couldn’t trust to keep their word. Imagine knowing no matter what you did to please them, you were most likely only prolonging the inevitable. It’s unthinkable.

The most important parts of the play are the details in the story and relating those to our own current times. The power of the story lies in the talent of all on stage. Most of the time, I felt like I was there with them, I felt nervous for them, and I cried right along with them as well.

Emerge yourself in a little history by picking up tickets here.

One thought on “The Importance of Vilna”