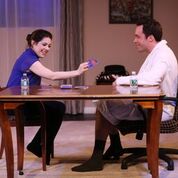 One of the best parts about NYC is all of the rich, wonderful shows that you can catch off-Broadway. I love a good Broadway show just as much as the next pop culture aficionado but I really enjoy the subjects that are explored in the smaller shows. This past weekend I was able to catch a touching, thought-provoking, and conversation starting show called ‘Fiercely Independent’.

Fiercely Independent is a new play by Tony winner Kathleen K. Johnson. It’s about a couple (Julie and Robert) who have been married for four years and are having some difficulties getting along.  They decide to spend 24 hours together in a hotel room with no television, no cellphones, no internet or computers to see if they can work things out – in separate beds. 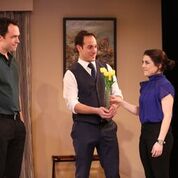 They have devised a set of rules to follow for the time they are spending at the hotel so that they can maximize their time with limited distractions, hoping to find some solutions and compromises to their issues. This may seem like very heavy subject matter, and it is, but among the serious discussions, there are moments of humor, of tenderness, and of hope.

I don’t want to give away too much of the story but I will say that it’s a very raw look at what our relationships have become in the modern age but also a reminder of how much relationships haven’t really changed. We all still want the same things: To be seen, to be heard, to be loved, and to know that we matter to another person. 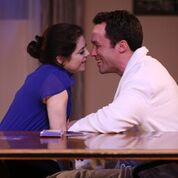 Both Julie and Robert have equal chances to air their grievances and they also find that there are more distractions than cell phones, computers, tv, and internet. Even without all of those, they wander from their true goal a little but then they are always reminded of why they decided to come to this hotel room and return to the task at hand.

If you’re in the NYC area, I suggest adding this one to your list of shows to see. It’s currently playing at SOHO Playhouse, so you can make an evening of it by visiting one of the local bars and/or restaurants. I absolutely suggest going with a friend or significant other because there will be plenty to discuss.

FIERCELY INDEPENDENT – a new play by Tony winner Kathleen K. Johnson – will be given its world premiere Off-Broadway at the SoHo Playhouse (15 Vandam St. in Manhattan), with preview performances beginning March 1 prior to an official press opening March 6.   FIERCELY INDEPENDENT will play a five-week limited engagement through April 7, it has been announced by producer Michael Guccione.

Featured in the cast of FIERCELY INDEPENDENT are Caitlin Gallogly, Christopher M. Smith and Jordan Sobel.

In FIERCELY INDEPENDENT, Julie and Robert have been married for four years.  They are not getting along.  They decide to spend 24 hours together in a hotel room with no television, no cellphones, no internet or computers to see if they can work things out – in separate beds.

CAITLIN GALLOGLY (Julie) is thrilled to be a part of Fiercely Independent! Recent cred- its include Jovie in Elf at the Engeman Theater and Janie Preston in On a Clear Day at Irish Rep. She’s best known as Princess Kenny on Comedy Central’s “South Park” and as Kim on “Silicon Valley” (HBO). Also on TV: “I’m Dy- ing up Here,” “Future Man,” “Mindy Project,” “Masters of Sex.” Recent stage: Forum, The Scarlet Pimpernel, Recorded in Hollywood (Kirk Douglas Theatre, Ovation nomination), The Women (Scenie Award, Eddon Award), The Belle of Belfast (EST/L.A.; Ovation, L.A. Weekly Award nominations), The Queen’s Physician. Thanks to her incredible family and Professional Artists. Caitlingallogly.com @caitlingallogly

Jordan Sobel is an actor, percussionist, fight designer, and teaching artist.  He has had performed in New York City and regionally in cities such as Boston, Chicago, Sarasota, and Fort Worth with companies such as The American Repertory Theatre, Huntington Theatre, and The Asolo Rep.

KATHLEEN K. JOHNSON (playwright/director) has numerous Broadway credits, having produced A GENTLEMAN’S GUIDE TO LOVE AND MURDER (2014 Tony Award), WHO’S AFRAID OF VIRGINIA WOOLF? (2013 Tony Award), HAIR (2009 Tony Award), GLENGARRY GLEN ROSS, RACE, A LIFE IN THE THEATRE, THE LYONS, THE BEST MAN, SUPERIOR DONUTS and BLITHE SPIRIT, among others.  Most recently, she developed and presented a workshop production of the new musical LOUISIANA RHYTHM.

FIERCELY INDEPENDENT has set and lighting design by Will Cotton; and costume design by Rodney Harper.  Original music and lyrics are written by Andrew David Sotomayor.  Recorded and produced by Erik Gloege.  Song performed by George Bugatti.

FIERCELY INDEPENDENT is produced by Michael Guccione, who has produced THE LYONS starring Linda Lavin on Broadway, along with the NY premiere of SHEAR MADNESS and also on Broadway, HOME FOR THE HOLIDAYS And RUBEN & CLAY’S CHRISTMAS SHOW.